Who is Cici Becker Dotson? 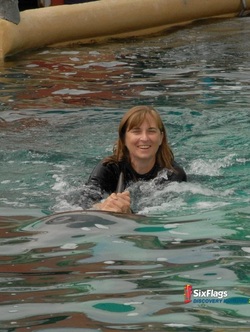 ​Cici is an energetically sensitive and spiritually-minded person.

At 18 years old, she decided to join the Army and, not surprisingly, she learned quite a few life lessons including how to take care of herself and others.

As her time in service was coming to a close, she noticed her health was deteriorating and began taking steps toward healthier living. Part of that effort led her to a holistic practitioner who advised her in better nutrition with positive results.

She started working with energy as a result of the same practitioner’s non-manipulative chiropractic adjustments. The effectiveness of using only hand placements fascinated her and she learned to use them on herself and others.  Little did she know - this was the start of her energy work!

In 2009, she was deployed to Iraq with the Army Reserve. That meant leaving her husband and full time of job raising her young children. As a result, she experienced daily anxiety attacks prior to that deployment. Fortunately, she found that the attacks were relieved and their emotional “triggers” reduced through a combination of energy work and flower essences. Today, she works with her clients to help learn to balance emotions and attitudes.

As she returned home from Iraq, she again found herself in need of re-evaluation.  It was during this time of intense introspection and inner healing that she discovered her abilities to feel or sense stones and other subtle vibrations, and perceive intuitive insights. She was drawn to explore therapeutic gemstones, which are the highest quality crystals, gems, and earth stones. She began her first workshop in Portland, OR with great skepticism!  Powerful healing sessions involving gems such as amethyst, blue sapphire, sugilite, sodalight, and lapis lazuli convinced her of the gems' overwhelming effectiveness.  She is now a graduate of the Gemisphere (TM) Gemstone Energy Medicine (TM) Certification Program and is versed in over 75 therapies using 40+ gemstones.

In 2013, she moved to Colorado Springs, CO and began training through her apprenticeship with Jane Keeran, owner/operator of Rocky Mountain Auracles.  Starting with Aura Image interpretations, she learned more about the chakra system and how to read and interpret energy patterns.  Cici then learned Reiki and received plenty of coaching in how to incorporate the Reiki with the energy already flowing through her hands - no small feat!  She is now a trained Reiki Master and offers classes upon request.

Soon after her apprenticeship with Jane began, she started reading natal charts with John Keeran.  Chaostrology incorporates current Astronomy, Spirituality, and Chaos theory and emphasizes the balance between life challenges and focusing for optimal growth.   John and Cici are working to finish their Chaostrology book with co-author and reader Vicky Rockey by September 2020.

She attended Tuning the Biofield Level III with Eileen McKusick in Burlington, Vermont and is now a Certified Practitioner.  She looks forward to sharing her expertise with her fellow human beings with love.
Contact Cici HERE
or Click HERE if you're not quite ready to connect